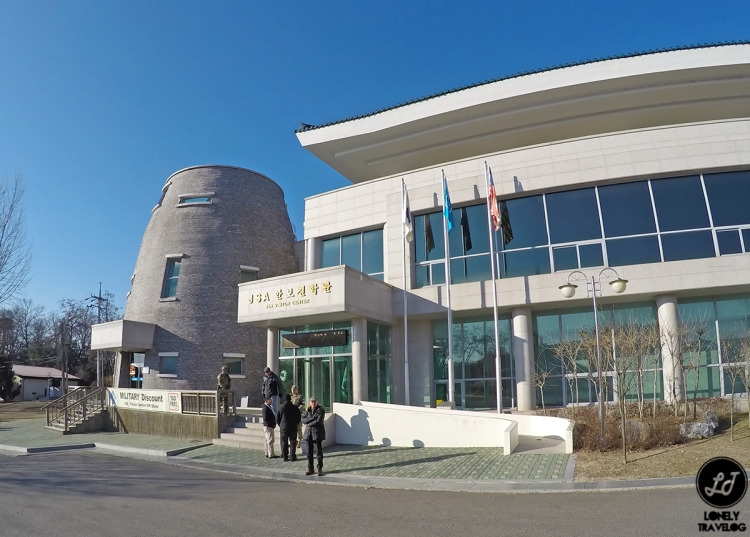 The only way to get a glimpse of North Korea is by touring the Joint Security Area (JSA) and Demilitarized Zone (DMZ). There are many tour operators but I would highly recommend Koridoor, which operates in conjunction with the non-profit United Service Organizations (USO). The full day tour cost US$92; a little steep but worth it since the tour includes visit to Third Infiltration Tunnel. You are required to book the tour in advance and provide a copy of your passport for security reasons.

All visitors will gather at Camp Kim, Koridoor Tour office in Yongsan. We hopped a bus from Camp Kim at 7:30am and headed north. When we arrived at the JSA visitors’ center,  we were transferred onto another bus. 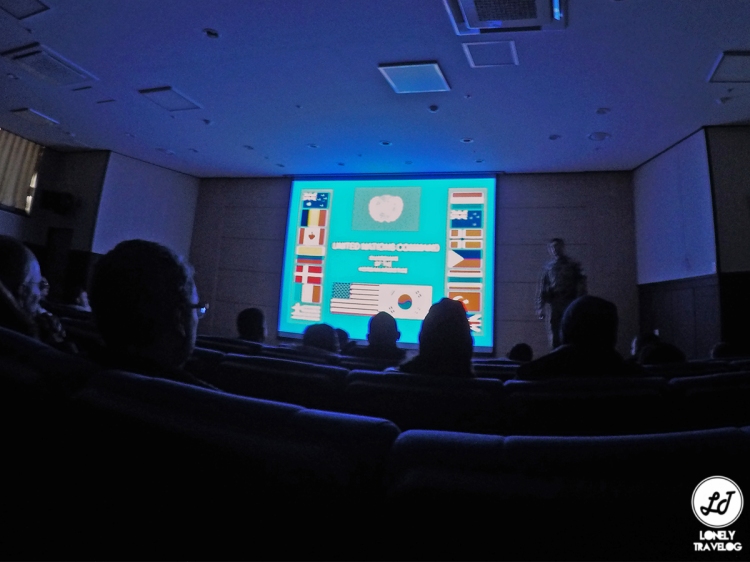 A short briefing by U.S. military at JSA Visitor Center.  All visitors have to sign a form acknowledging that we will not point and make gestures or expressions like scoffing, abnormal action(s) which could be used by the North Korean side as propaganda material against the United Nations Command. 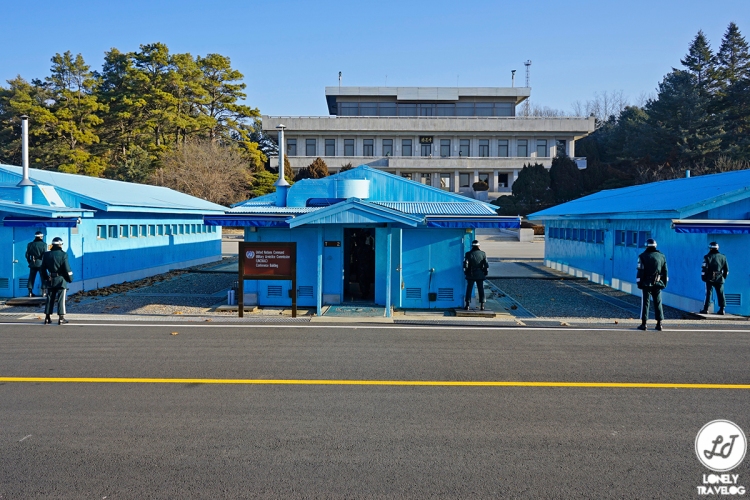 We were guided by the military personnel to the Freedom House. We were instructed to stand at the steps of the Freedom House in a row facing the blue buildings. At this point, we were given the opportunity to take as many photos within a few minutes. No pointing at the North Koreans or taking photos on the right side, left side or behind at the Freedom House. 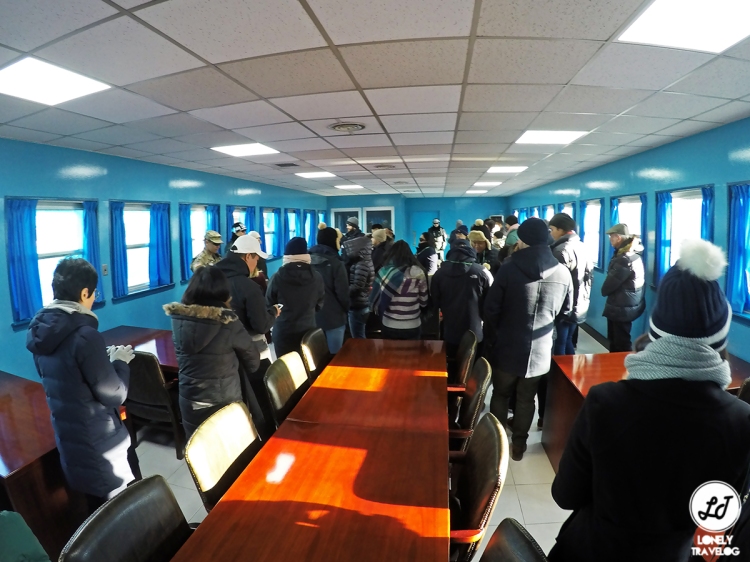 We were ushered into one of the blue buildings which consist of a conference room and a table situated so the demarcation line runs lengthwise down its center.

The stone-faced guards adopt what is often described as an “Taekwon do stance”. They wore sunglasses to avoid making eye contact with their counterparts. 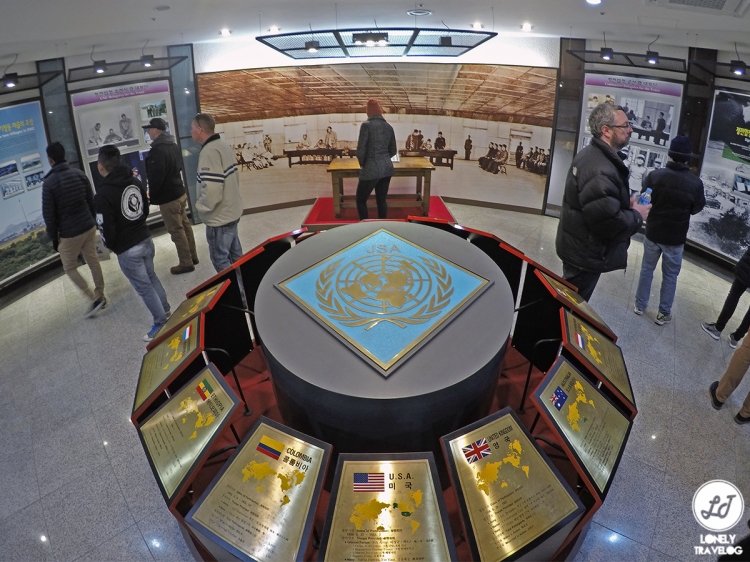 Next, we headed to Dorasan train station. This is the northernmost station in South Korea along the rail line that once connected the two countries. This is the last station before North Korea.

You can purchase a ticket with a commemorative stamp.

You could actually hear propaganda music from North Korea at this station.

The station is dedicated as not the last stop from Seoul, but the first to Pyongyang 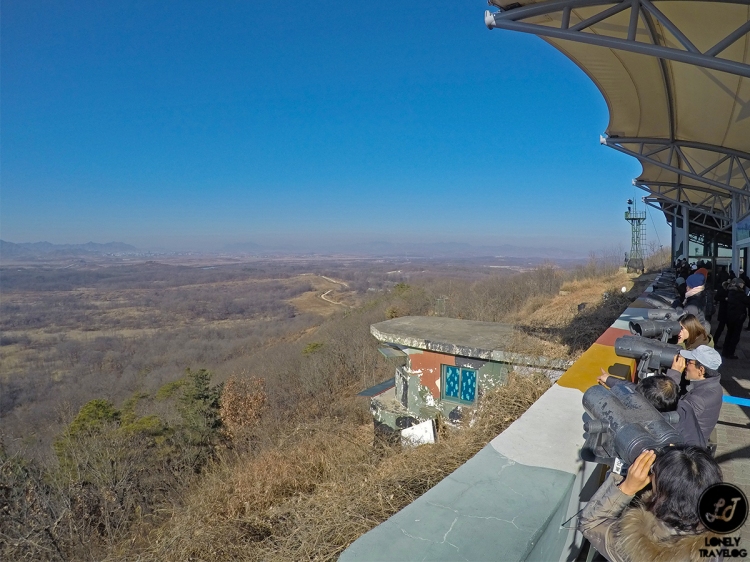 After lunch, we went to Dora Observatory, a hilltop observation post with a great vantage point of North Korea.

I could get a glimpse of the “Propaganda Village” from far. It is believed to be largely vacant and just for show. Look out for the North Korean and South Korean flag posts. 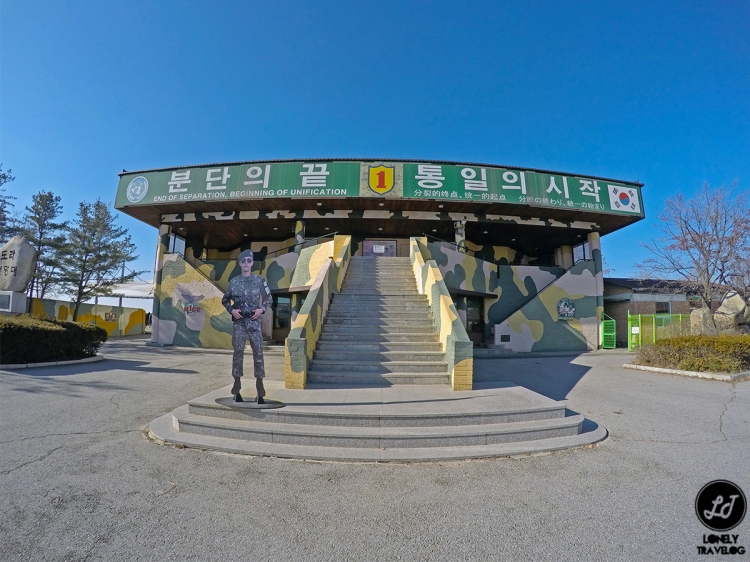 We were brought up to the auditorium where they will provide a brief history and the area you could see from the Dora Observatory. Unfortunately, no photography is allowed in the auditorium.

The last stop of the tour is the third infiltration tunnel. It is one of four known tunnels under the border between North and South Korea. A walk along 1,635m of a tunnel dug 73m underground by the North Koreans years ago as a means of infiltrating troops into the South. The incomplete tunnel was discovered in 1978 following the detection of an underground explosion.

No Photo or Video allowed in the Tunnel

Visitors have to deposit their phones and camera before entering the tunnel. We put on the yellow hardhats and walked down hill. You can walk a full 265 meters until hitting the divider installed to protect the South from attacks by the North. Heading back up is definitely a challenge since the tunnel is uphill. I would not recommend to enter the tunnel if you have health issues.