by Hero @Lonely TravelogPosted on December 1, 2012

Singapore itself is a multicultural kaleidoscope. Like any other communities, the Peranakan is unique and rich in culture as well. The terminology of the word Peranakan mean ‘descendent’ is a rich hybrid of Chinese and Malay traditions with the touch of Portuguese, Dutch and Indonesian influences. The Peranakan Museum is located at Armenian Street, which explores the culture of Peranakan communities in Southeast Asia. 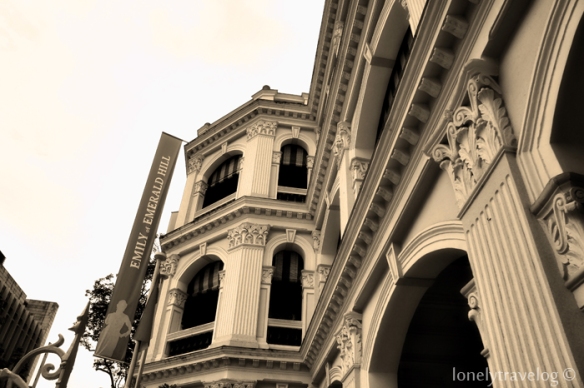 The Peranakan Museum building was a former Tao Nan Chinese School, built in 1912. The building was designed in the “Eclectic Classical” style. The fluted columns and the symmetry of the building are characteristic of Classical architecture while the balconies fronting the facade suggest a colonial or tropical style.

Apparently this cat is the museum’s mascot.

It is believed that the eagles were first installed in the front of the school as sort of a talisman against undesirable elements.

Main entrance to the museum.

Friendly visitor information counter. There are various types of admission charges but I like the idea of free admission for students! There are total of 10 galleries  and special exhibition galleries. All of these galleries showcases the world’s finest and most comprehensive collection. No kidding. 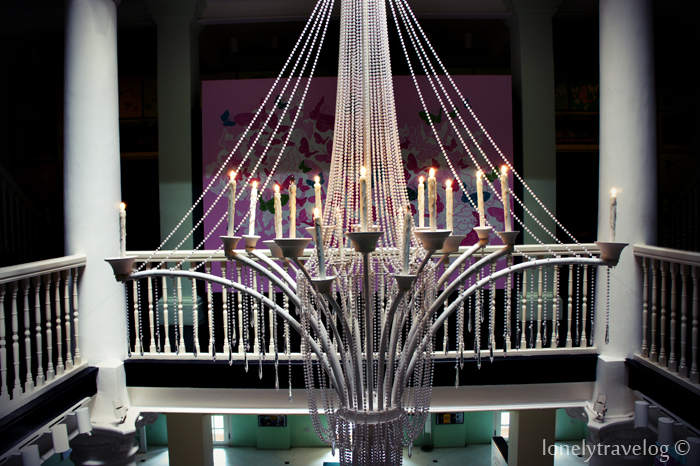 Can I have this chandelier at my home please?

Each visitors will be given a sticker as an admission ticket. At the moment, Peranakan Museum showcase an exhibition called “Emily of Emerald Hill”: Singaporean Identity on Stage, which will end on 17 February 2013. 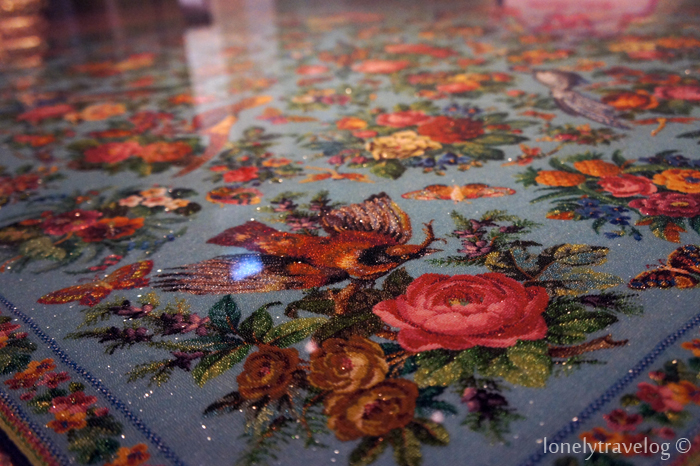 This is a beaded tablecloth. Without realising, over a million glass beads make up this tablecloth  I wonder how long to complete this. 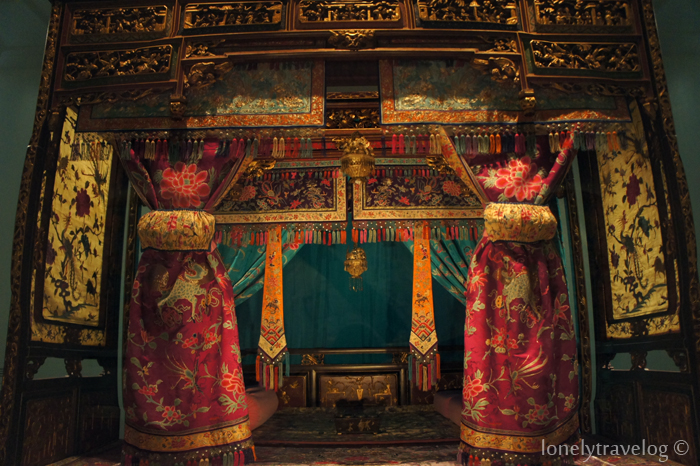 This is the wedding chamber. A room used by newlywed during the traditional 12 day wedding ceremony. The wedding bed was vitally important because it was the place of conception for the next generation of the family. Therefore, it had to be ritually purified and charged with positive energies as well as protected any malevolent forces. The bed, decorated with textiles depends on the wealth and status of the family.  Bunga rampai or potpourri of flowers and perfume was used to enhanced the scent atmosphere. 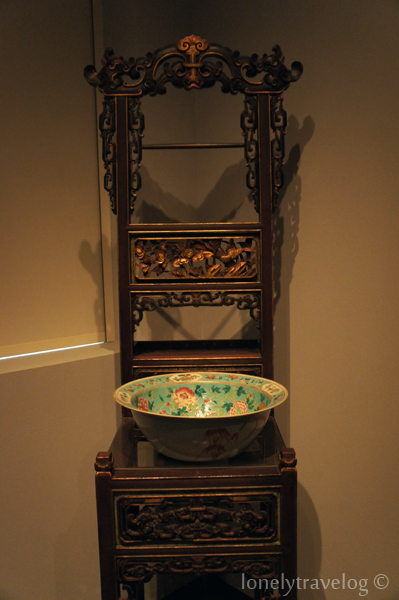 A washstand stood in the wedding chamber of a house typically holding a colourful porcelain washbasin and a linen tower. This one is carved with floral cloud motifs, and the shell for the washbasin had the auspicious swastika motif. The interior of the basin is decorated with phoenixes and peonies, symbols for prosperity. 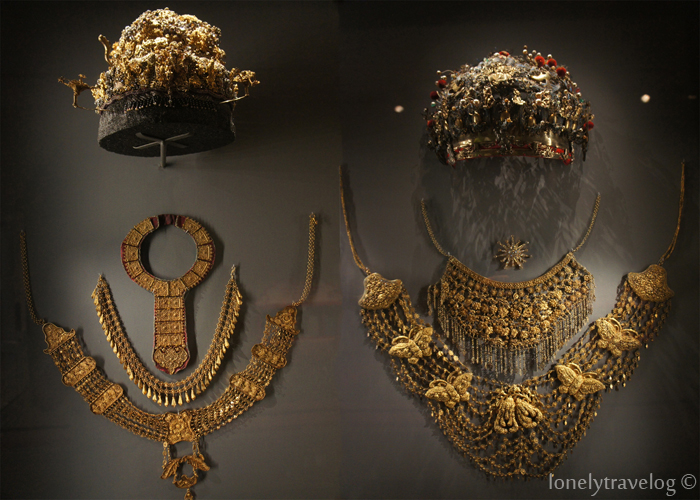 Wedding jewellery wore by the bride.

Pantun or poem is very close to the heart of peranakan community. Likewise, the malays love pantun too. This poem talks about the qualities of being a  filial daughter in-law. She must be a good housewife with grooming skills, able to cook and do housework. Ultimately, respect the elderly. 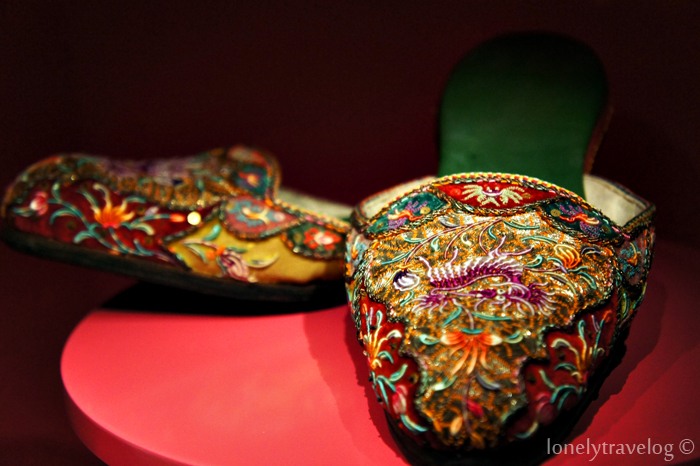 Men in the community are often known as ‘baba’. This embroidered footwear are worn by the men.

While ladies known as, ‘nyonya’ or ‘bibik for older women. Subsequently, this beaded footwear are worn by women. 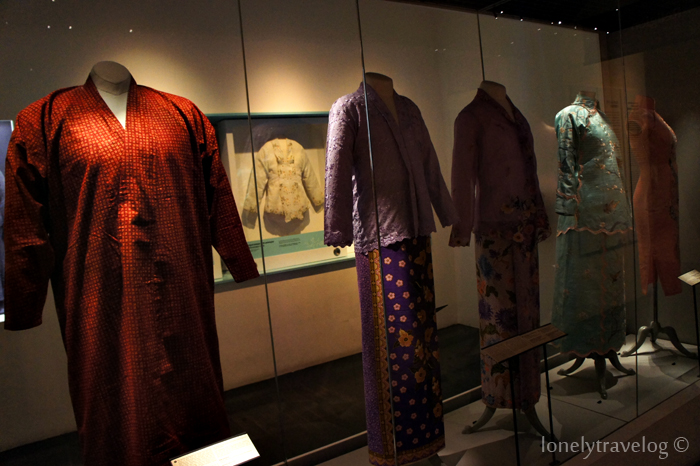 What is peranakan without showcasing its range of Kebaya, peranakan traditional costume. 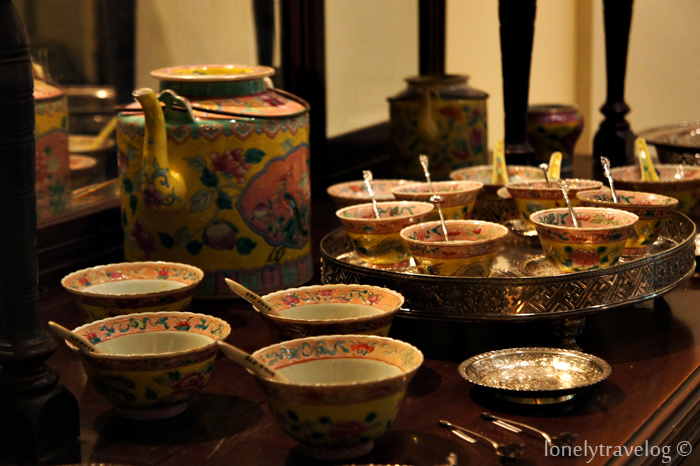 Food glorious food! Some of the dining ware used during feasting. 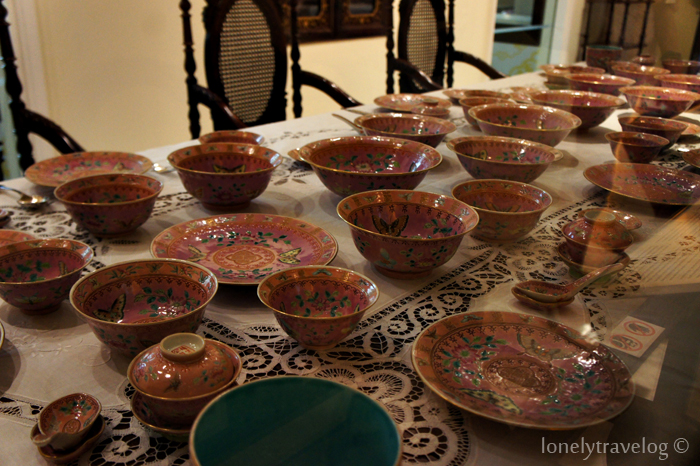 The dining table ready for the traditional feasting. Tok Panjang refers to the feast laid out on long rectangular tables often found in Peranakan Chinese homes. Peranakan dining ware consisted of sets of plates, bowls and spoons of various sizes, each having a different use on the dining table. There are 16 different types or shapes laid out on the dinning and dessert table.

See those 2 small plates, I believe it is use to prevent ants crawling up the dining table.

A surveyor from National Heritage Board (NHB) asked me which artefact I like the most. Without hesitation, I answered back “The coffin”. It seem interesting to me. The coffin was covered with an elaborate embroidered coffin cover, which was decorated with a host of motifs favoured by the Peranakans, phoenix and peony. These were often stitched onto funerary colours like indigo blue, purple and green.

Forgive my reflection on the deceased photo. A table would be placed in front of the coffin which would contain offerings of fruits, flowers and incense and fronted with a funerary altar cloth. Most of the artefacts were from 20th century.

Peranakan traditional wedding costume donned on the bride. Geometric layering around  at her neck is the phoenix collar to symbolise the power of the feminine phoenix in Peranakan society.

Another setting of the play.

Stamp activity that you can bring home as souvenir. 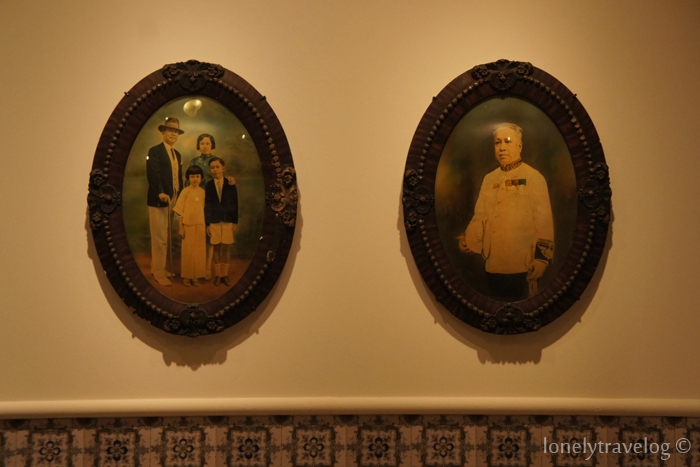 Some of the staging advert. Emily of Emerald Hill: Singaporean Identity on Stage exhibition is on through 17 February 2013.