The beauty of Nami Island is indescribable. This small charming Island is a popular tourist destination in Seoul. Known for its stunning scenery, this is a must-visit attraction and you need to set aside half a day for your visit. Nami in winter is simply picturesque

Nami Island (Namiseom or Naminara) is a small ‘doraemon pocket lookalike‘ island situated 63 km from Seoul in the middle of the Han River. This charming Island is famous for the ‘Winter Sonata’ film locations back in 2002. Apparently, Nami Island declared its cultural independence on March 1, 2006. Like other independent republics, Naminara Republic has its own national flag, anthem, passport, postage stamps, telephone cards, written characters, papers, and currency. Do not fret, passport is not required to get to the island but admission fee applies.

Watch snippets of my journey to Nami Island.

Getting to Gapyeong Wharf

The best and cheapest option is by rail. You may refer refer to the Real time rail map for your route.  Click here for quick guide.

Depending on your point of origin, I took the above route to reach Gapyeong station. From Chungmuru >> (Transfer to) Oksu  >> (Transfer to) Sangbong >> Gapyeong. Do note that from Sangbong to Gapyeong, you are traveling on Gyeongchun Line, operated by KORAIL. You will noticed that Sangbong station or Gapyeong (Gyeongchun line) does not exist in your subway map because they operate individually. However, you only need to tap-in your T-Money card from the origin station (eg. Chungmuru) and tap-out at the exit (eg. Gapyeong). No additional ticket needed. The train ride cost me 1950KRW.

From Gapyeong Station, I took the cab to Nami Wharf. The taxi stand is located outside the station. The cab driver understood well enough regarding the existence of Nami Island ferry terminal. This short cab ride will cost you less than 3000KRW per trip.

There are Shuttle buses departing from Insadong and Namdaemun (w.e.f 1 Jan 2015).

Depart from Insadong (Tour bus stop near Tapgol park) at 9.30am. Returning to Insadong from Nami Island at 4.00pm. To do so, you need to book your ticket in advance OR be there as early as 9.00am to purchase your tickets, subject to availability. Round trip will cost 15000 won per adult.

2 ways to get to Nami Island. The conventional way or adventurer way.

For adventurers, you can take zip lining which you bring right to the Island! It cost 38,000KRW including admission visa. Fastest way to reach and you can enjoy the adrenaline rush. 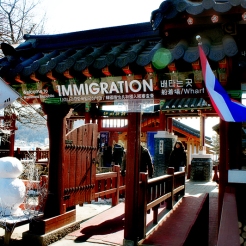 The conventional way is by ferry. Get your entry visa at the counter for 10,000 won for round-trip ferry fare & tax included in ticket price. After which, proceed to the wharf entrance to board the ferry. 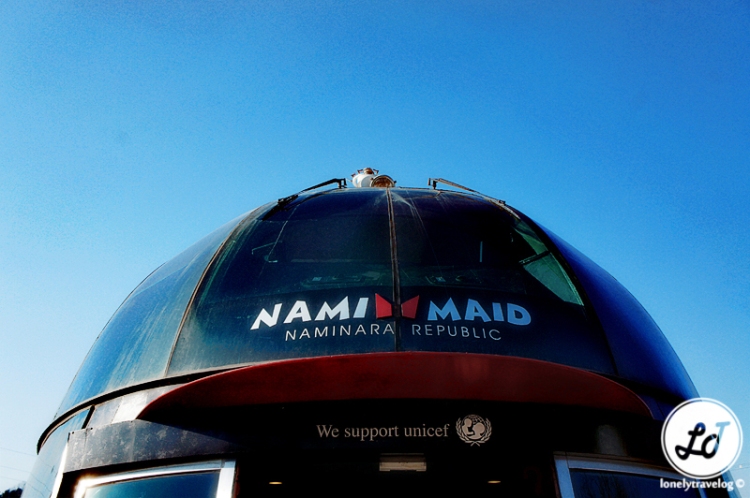 The Nami Maid will ferry you to the Nami Island. 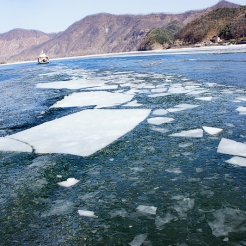 The weather was so cold that you can notice the blocks of ice floating on the river. The ferry ride will take about 5 mins. 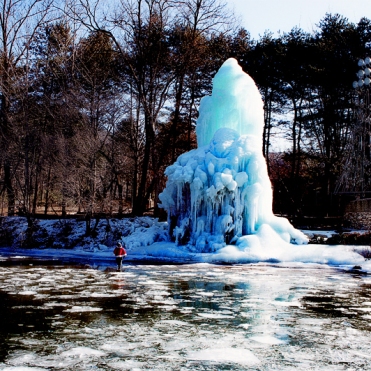 Upon reaching Nami Island wharf, notice the statue wearing red top right in the middle of the river. This is one of the famous landmark to look out for. Unfortunately, the river was covered with icy snow.

Nami Island was named after General Nami, a notable figure in Korean history who courageously fought in battles but died at the age of 26. 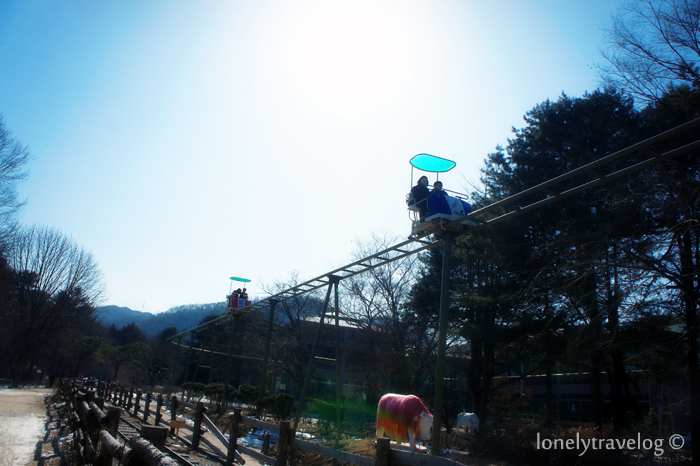 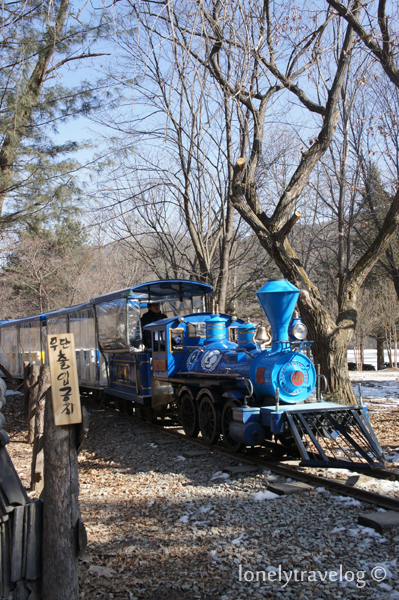 The UNICEF train runs between the entrance of the island to the central station in the main square. 2000KRW per ride. 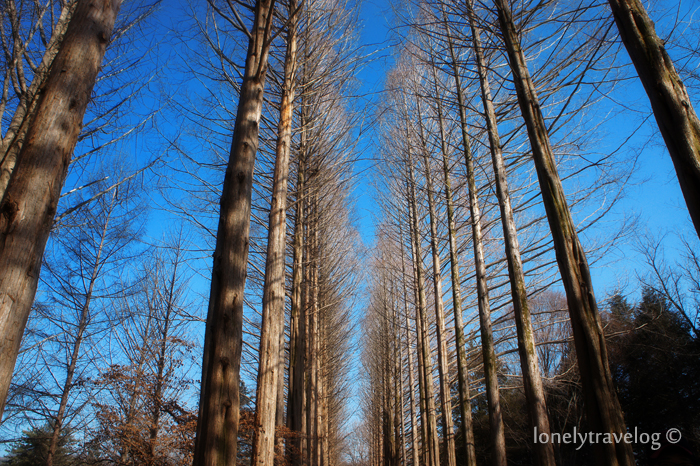 Trees reaching sky. Some of the location of Winter Sonata

Beautiful scenery of the lane 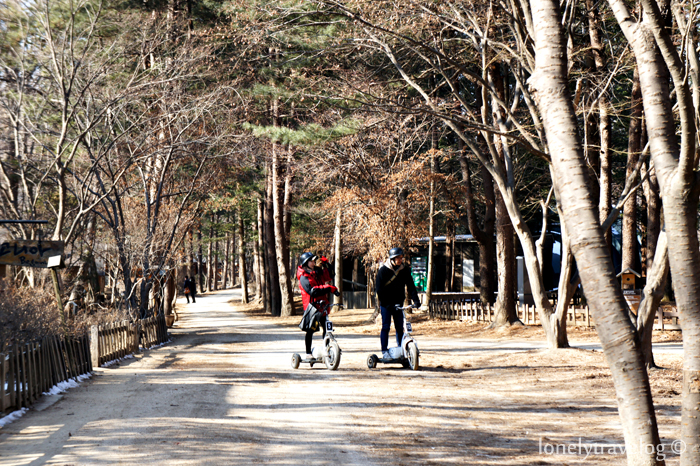 A stroll along the coastline. Enjoying the nature and white winter

While walking I saw this couple standing in the middle of the frozen river! 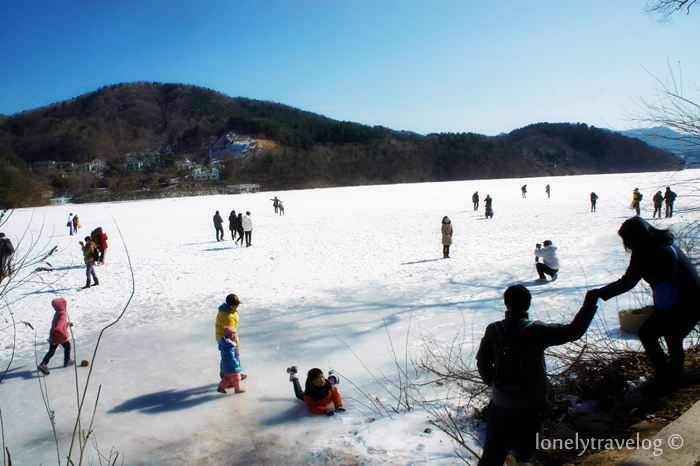 I saw more and more people on the frozen river and I decided to join in the fun. lol

Shortly after, we’ve been chase out by the police official for safety reasons. Anyway, I don’t want to die because of hypothermia in case the layer of ice breaks. 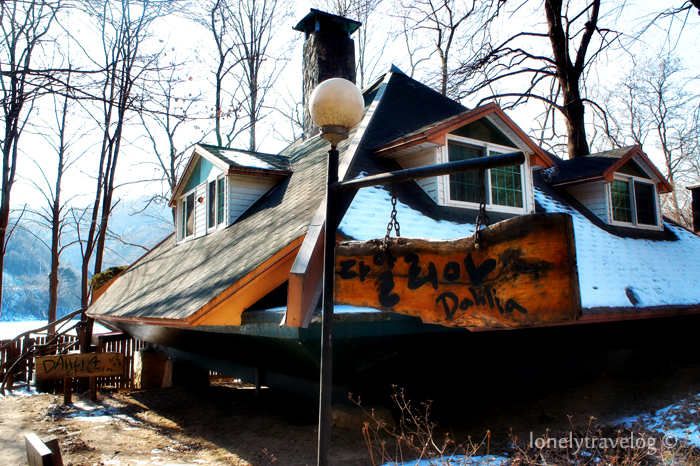 There are different apartment to stay at Nami Island. This is one of them called Dahlia.

A cafe to get a cup of coffee

err.. I don’t need to elaborate on this. 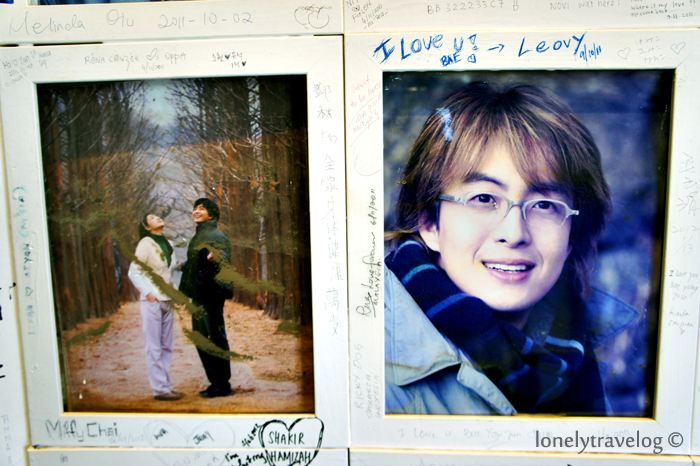 Inside the galley contain all the photos of the winter sonata drama in 2002.

These thai girls trying to keep warm. Fireplace like this are provided at designated place 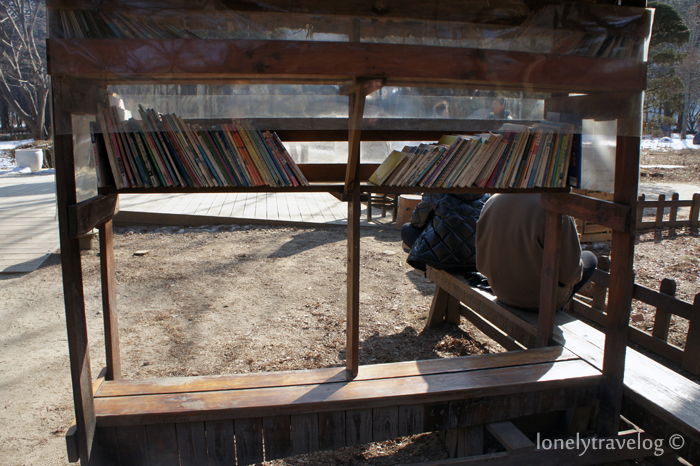 You can easily find a children story books! Even in the toilets cubicle. 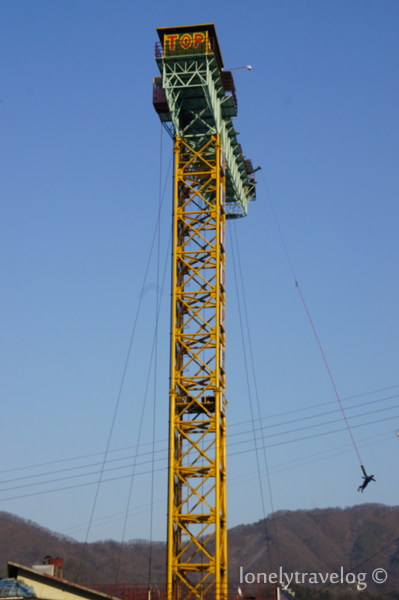 If you’re up for an adrenalin rush. There’s a Bungy jumping activity, a 55-meter jumping tower near the dock to Nami Island.